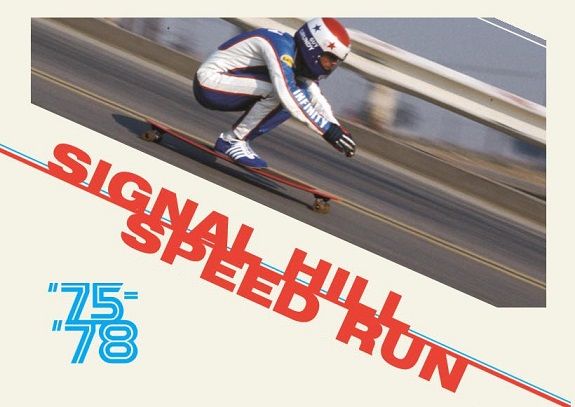 Guy "Grundy" Spagnoli
This was gravity ground zero,  the place where gravity land speed racing was born.  It happened on a  small section of road named Hill Street in Signal Hill, California, with a tilt of almost 30 degrees!  In 1975 Jim O'Mahoney promoted this historic speed event, and for the next four years the event became possibly the greatest gravity speed event ever.  Longboard, street luge and the infamous enclosed skate cars were invented and ran here by these gravity pioneers .  This is where the earth's gravitation pull created the great gravity speed merchants, the legends, and pioneers, with names like, Henry Hester, Guy Grundy, Roger Hickey, Jack Smith, Terry Nails, Dave Dillberg, Sam Puccio, the list goes on and on.  As the world record gravity speeds increased on Hill Street, so did the risks.   Safety eventually had taken a back seat to speed.  With numerous injuries to competitors, some serious, and now incidents involving spectators, the plug was finally pulled in 1978.  The Signal Hill Speed Races were now history.   Below are some stories of this historic event.

Board out of their minds 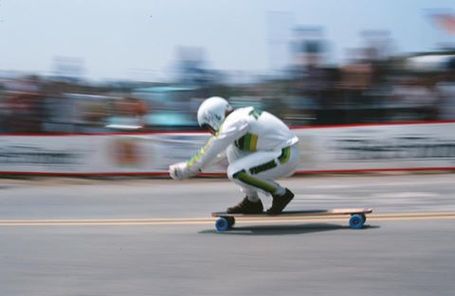 Micheal McCreary
The Signal Hill Speed Runs were the precursor of the X Games and gave skateboard daredevils a chance to show their stuff. After a series of crashes, it was ruled too dangerous to go on.  It was 1975 and skateboarding was hugely popular when Jim O'Mahoney, head of the U.S. Skateboard Assn., got a call from the producer of ABC's television show, "The Guinness Book of World Records."  The producer wanted to shoot a skateboarding event for the show.

As a child, growing up in Long Beach, O'Mahoney begged his parents to drive fast over the steepest section of Hill Street, an almost 30-degree incline in Signal Hill that mimicked the feeling of a roller coaster.  O'Mahoney told the TV producer he could create a downhill skateboarding race on the steep Signal Hill incline, bordered by oil fields. "It was also the location of the annual Model T Hill Climb, where they raced their souped-up Fords from the bottom to the top. It was the natural place to do it," he explained.

So for the next four years Signal Hill was the site of some of skateboarding's hairiest races and most vicious wipeouts. The Signal Hill Speed Run, the world's first downhill skateboard speed race, also prompted several developments in the sport, including street luge racing, fully enclosed skate-cars and the introduction of women to the sport of downhill.  Downhill skateboarding and street luge racing are popular again, with the North American Downhill Championships taking place this weekend at the Frank G. Bonelli Regional County Park in San Dimas. Marcus Rietema, the event's organizer, said, "Everything we do today relates back to Signal Hill."

The contestants in Signal Hill's downhill races remember them as wild, death-defying parties on wheels.  Before the first race in 1975, O'Mahoney got insurance, had police block off the streets and got a permit from a confused Signal Hill Chamber of Commerce that didn't quite understand the event's danger.

Surfer Guy Grundy remembers getting a call asking if he wanted to enter the first event. He quickly got to work practicing and finding a helmet and leathers for safety.  The day of the event, it was clear that not everyone had prepared like Grundy. "One guy in shorts and a T-shirt looked down the hill and said there is no way I'm going down that. 'You are absolutely nuts,' " Grundy recalls. "About six of us turned up to compete, but only two even tried" to race.  The other competitor, Garrison Hitchcock, fell and dislocated his shoulder. Grundy made it down without incident and his top speed of 50.25 mph earned him a trophy and entry into the Guinness Book of World Records.

The next year, a bigger crowd was on hand to witness a more competitive contest. Some skaters took illegal practice runs in the dark the night before.
Chuy Madrigal wouldn't let a broken arm keep him out. He hid his cast from O'Mahoney under extra large gloves. In the race, he wiped out but didn't re-injure his arm thanks to a custom fiberglass cast made by fellow competitor Dave Dillberg.

It was a race, but many spectators and contestants treated it more like a party. The crowd went wild when a drunk spectator in a bathing suit grabbed a plastic Big Wheel and shot the hill without incident, although his clocked speed of 36 mph kept him out of contention.   In a more dangerous moment, one stand-up skateboarder fell on the hill, and his aluminum skateboard shot out from under him and careened through the crowd, clipping a boy in the leg, and sticking in the side of a car.  O'Mahoney had planned ahead and had ambulances at the ready, and they quickly whisked the boy to the hospital.

In the 1976 contest, San Pedro longshoreman Sam Puccio Jr., who skipped his daughter's baptism to compete, laid on his back on a homemade skateboard fashioned out of a two-by-six plank and clocked 54 mph, claiming the $1,000 winner-take-all prize. 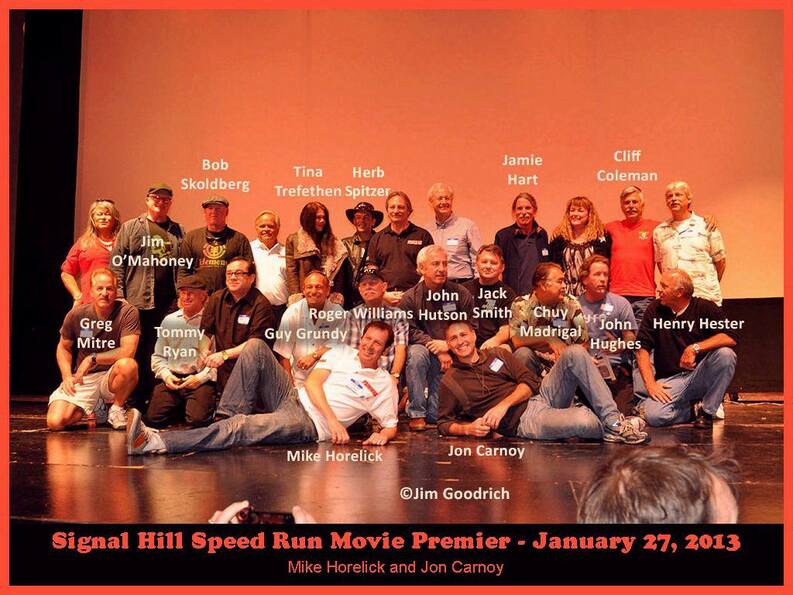